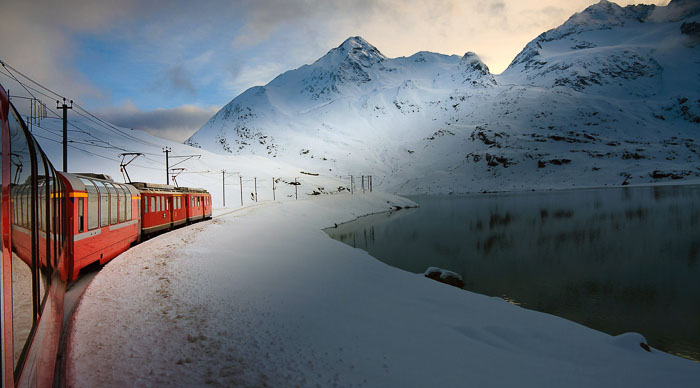 A train journey through Europe is mostly about comfort and efficiency, arriving and departing on time, and getting a chance to sleep in a cozy compartment. But rail travel in Europe is also about enjoying enchanting vistas and splendid natural beauty.

Europe train journeys have emerged as travel attractions on their own, and are now attracting people from all over the world, offering gaping views of Alpine glaciers and treating them to tantalizing cuisines in old-world dining cars. Here are some of the best European train journeys to watch out for.

The Bernina Express, Chur, Switzerland to Tirano, Italy (above image)

The Berina Express is a narrow-gauge train that climbs an incline of 7931 feet before descending 5905 feet to reach its final destination. As a result, it passes through some of the most enchanting locales on the planet, including 196 bridges, 55 tunnels and a 360-degree spiral. Don’t get fooled by the word Express. It only refers to how fast the tickets for this journey vanish. Other highlights of this European alps’ train journey are that it passes through one of the oldest towns in Switzerland and many parts of its route are declared as UNESCO World Heritage Sites.

The Venice Simplon-Orient-Express from London to Venice

It takes two days and one night to travel from London to Venice via the Venice Simplon-Orient-Express, but consider this as time well spent. The train dates all the way back to the 1920s and was one of the pioneers of the Golden Age of Rail in Europe. Today, it is more about offering new travel experiences. The operators restored 35 vintage sleeping cars to their old-world charm, sophistication and beauty. Remember read those romance novels depicting enchanting European train rides? Many of them might have actually been inspired by the Orient Express!

The Danube Express from London to Istanbul

Another popular train journey from London is the Transylvanian Odyssey. It takes 8 days (including stays in Istanbul and Budapest) and is considered to be one of the most luxurious train journeys on the planet. From fine dining experiences to classic elegance and luxury amenities, the Danube Express really does have it all. The journey also penetrates the beautiful heart of Transylvania and offers walking tours in medieval era towns as well.

The Chocolate Train from Montreux to Broc

The Chocolate Train takes approximately 10 hours for a round trip journey, and is one of the most charming rail journeys in Europe. The train operates during the summer and fall seasons and passes through the fascinating Lake Geneva and the medieval town of Gruyeres. You can tour the cheese factory, enjoy a local lunch, explore the castle and then board the train for your journey to Broc. The trip also includes tours to the Cailler-Nestle chocolate factory which is located between the Lake Gruyeres and surrounding mountain peaks. The factory boasts of a brand new visitor center that traces the history of Swiss chocolate, all the way back to the Aztecs. And there’s plenty of chocolate available for consumption!

A journey from London to Paris onboard the Eurostar is one of the best travel experiences for any family trip. It is sure to fuel a childlike curiosity in the most avid travelers since many tracks are actually submerged in the English Channel, and the fact that the Disneyland Paris lies in store for travelers at the end of the journey is only bound to make things more exciting. The excitement begins even before the train begins its journey from the St. Pancras Station, as live bands welcome travelers and send them off on their exciting journey.

The TER Mediterranee is a high-speed, high-tech train that runs on one of the most notable routes in France, the Mediterranean line. While the train itself might not be exceptionally beautiful, it more than makes up with the mindboggling sights on display, as it straddles the picturesque French Riviera coastline for close to 4 hours. The train also makes leisure stops at many of the quaint villages, old world towns and hidden beaches that crop up along the way.

Offering train journeys through Spain the Elipsos Train-Hotel is perhaps one of the most luxurious train journeys on the planet. You can easily substitute your hotel stay with this train ride, for the train actually resembles a hotel in terms of its comfort. Sure, the space might be cramped, but the experience makes it totally worth it and downright appealing. The premier compartments offer amenities such as morning newspapers, en-suite showers and complimentary breakfast.

The Castles of Britain, Inverness, Scotland to Gwynedd, Wales

The Castles of Britain Journey lets you relive the Age of Chivalry like no other. It takes 15 days to complete this scenic itinerary which also offers entry to close to 580 attractions that can be found along the way. Travelers start their journey in Inverness, Scotland with a tour to the Urquhart Castle. Other major sights and attractions include the Stirling Bridge, Edinburgh Castle, Dover Castle and Caernarfon Castle. This train ride is perhaps the best way of exploring British heritage at its beautiful best.

The William Tell Express has become popular for offering one of the most scenic journeys on the planet. It takes you through an array of Swiss natural wonders, and features a 5-hour boat-train combo ride which brings you closer to some of the most fabled areas in Switzerland – Ticino, Bernese Oberland and Lake Lucerne.

It’s finally time to say goodbye, and we surely had a blast introducing you to The European Dream theme. Hopefully, by now, you would have realized that a tour to Europe and its magical gems is something that simply cannot be missed. The rich history, beautiful culture, old world attractions, ancient architecture, fascinating cuisines, world-class cities and breathtaking natural beauty that can be found here makes the continent perfect for all sorts of travelers.

Don’t forget to check our that other European Dream articles: