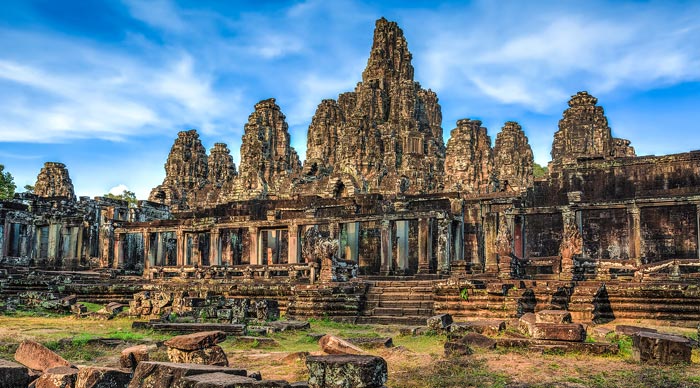 Cambodia burst onto the travel scene the moment Lara Croft (played by none other than Angelina Jolie) decided to swing through its ancient temple ruins and showcase their fascinating beauty to people all over the world. Soon, the country began to conjure images of age-old ruins, ancient temples, dense jungles, breathtaking natural beauty and fascinating wildlife, and there was really no stopping the modern day traveler.

Cambodia’s busy towns and quaint villages feel extremely peaceful, but things weren’t always the same. The country has an extremely violent, depressing and terrible history and its internal conflict is one of the main reasons why many parts of Cambodia are still unknown to the travel world. However, as more and more tourists trickle into its borders, the authentic eating adventures, boutique shopping venues and age-old traditions are finally beginning to see the light of the day. Any trip to Cambodia is sure to be dominated by Siem Reap and its temples, but there are still other best things to do in Cambodia as well. Here are some of the most popular attractions and adventures that you cannot ignore once step foot into a country that conjures images of heaven and hell at the same time.

Angkor Thom hasn’t enjoyed the kind of restoration efforts accorded to the Angkor Wat, but it still offers enough to excite the modern day traveler. The ancient temple is defined by its entry bridge which flanked by 54 stone warriors who have been depicted playing tug of war with the Naga snake. The heads of most warriors went missing as a consequence of the Vietnam War, which makes the entry bridge a great destination for an exciting Facebook photo. Other reliefs depicting various aspects of human life such as women cooking, men playing chess and mothers giving birth are also popular.

Insider Tip – The ideal way of exploring the various Angkor temples is to choose an Angkor day tour. These tours usually cover the most important and popular temples and offer the services of English-speaking guides as well.

Ta Prohm, more famous as the Tomb Raider temple, has been left the way it was found – full of tree roots and crumbling walls – to show the state in which the rest of the temples were discovered. Ta Prohm is just one of the extraordinary temples in the largest pre-industrial city of the world, but it is the best example of how nature reclaimed her lands from mankind over time. Ta Prohm’s 12th century ruins burst onto the travel scene once they were “explored” by seductive “archaeologist” Lara Croft, and the deliberate state of neglect ensures that you get that perfect photo opportunity for your very own Tomb Raider moment. 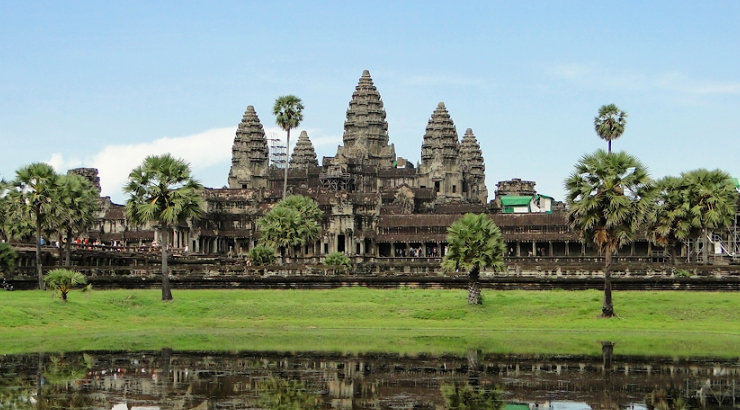 Angkor Wat, the largest, most popular and most enchanting temple in Cambodia, is so special that even the country’s flag has an image of the temple. It was built in the 1100s as the resting place for King Suryavarman II. The temple was largely unknown to the world until the country was colonized by France in the 1800s and perhaps this is why it is also one of the best-preserved temples in the Angkor complex. One of the most exhilarating attractions of the temple is its bas-relief wall that depict images of heaven and hell in the same breath. Other highlights include the 1800 dancing maiden carvings that are located all over the complex.

Insider Tip – As dreadful as it sounds, reaching the temple at 05.30 AM is the ultimate thing to do while in Siem Reap. You mumble and grumble at the thought of waking up so early on a holiday, but still end up doing it because those sunrise views are totally worth it. Just make sure you understand where to sit for unobstructed viewing opportunities (the steps of those outpost buildings) and ignore the monkeys.

The following tours are highly recommended:

Phnom Penh was once famous as the Pearl of the Orient. Dominated by jacaranda and tamarind trees and wide boulevards, the city has a cosmopolitan feel to it because of the presence of all kinds of luxury hotels, shopping arcades, cafes, bars, nightclubs and restaurants. Phnom Penh’s romantic riverside has an irresistible energy which always conjures feelings of enthusiasm and adventure in its visitors. Apart from its exotic riverside, the city is also home to old-world villas and beautiful temples. The main highlights of the Phnom Penh  tour are the Royal Palace, National Museum, Killing Fields and the Tuol Sleng Genocide Museum.

Other Asian countries like Vietnam and Thailand might be more popular when it comes to beaches and dreamy coastlines, but Cambodia isn’t any pushover either. Sihanoukville is the ideal Cambodian destination for all things beachy, and it is made even more exotic by the fact that much of it is still unaffected by tourism. Sihanoukville is full of remote islands such as the Song Saa Island and white sand beaches such as the Occheuteal Beach. The Song Saa Island is home to one of the top all-villa resorts in Asia, while Occheuteal Beach is famous as the best and most popular beach in Sihanoukville. To enjoy the perfect beach experience, avoid the beach during the day as it is always full of nuisances and vendors. Time your trip to make it just in time for sunset, so that you can enjoy sunset views and happy hour discounts in those beach bars at the same time.

The Royal Palace, one of the top best things to do in Phnom Penh, dominates the city skyline with its ornate gilding and classic Khmer roofs and is famous for its remarkable likeness to the Royal Palace of Bangkok. Most of the palace is closed to the public, but one can still explore the Throne Hall and the surrounding buildings. The Silver Pagoda complex located next to the palace is also open to the public.

Insider tip – Wearing appropriate clothing is a must to get entry into the palace grounds. You need to wear shorts that reach the knee and blouses/ t-shits that reach the elbow at a bare minimum.

The National Museum of Cambodia is located very close to the Royal Palace. Housed in a beautiful terracotta structure, the museum is home to the finest Khmer sculpture collection on the planet. It consists of an inviting garden courtyard and four beautiful pavilions. Some of the star attractions of the museum include a bronze reclining Vishnu statue that was recovered from the Western Mebon Temple, Shiva statues dating back to the 9th century, a 6th century eight-armed Vishnu statue which was discovered in Phnom Da, a pair of 10th century wrestling monkeys and a 12th century stone which inscribes scenes from Shiva’s life.

Insider Tip – Photographing the collection is prohibited. The only photo opportunity inside the museum complex is the garden courtyard.

The Prek Toal Bird Sanctuary is a part of the largest freshwater lake in Southeast Asia. Typical itineraries cover the bird sanctuary, but also include visits to the nearby floating villages and cruises on the lake itself. The bird sanctuary is a part of the Tonle Sap Biosphere Reserve and is considered to be an important breeding ground for different types of large water birds in Southeast Asia. Common bird sightings include the milky stork, gray-headed fish eagle, painted stork, spot-billed pelican, and black-headed ibis.

The Angkor Wat temple might be the most famous temple in Cambodia, but the Bayon temple is still known to be one of the country’s most recognizable icons. Bayon’s icons are its stone-carved Buddha faces, those massive Buddha silhouettes that jut out from the temple towers and their enchanting and mysterious smile has been entertaining travelers for generations.

Pub Street is an area that is known to enjoy a vibe that is usually felt in New Orleans during Mardi Gras. The place is full of exciting bars and restaurants, and a number of world-class spas as well. Drinking the Tomb Raider cocktail and getting a fish pedicure are among the top things to do here. The Siem Reap Night Market is also worth a visit. The market is famous for its oil paintings and knock-off Ray Bans. 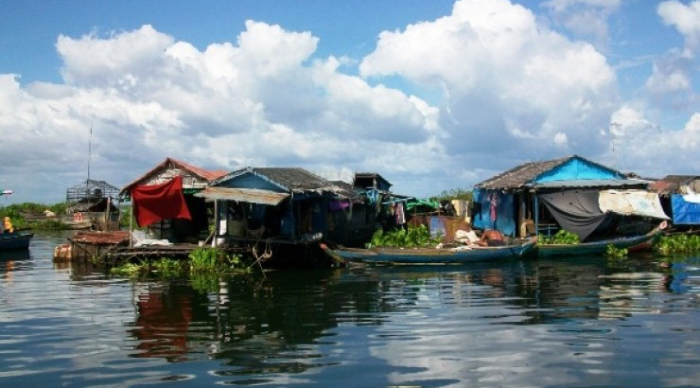 The Tonle Sap Lake tour is an eye-opener for travelers visiting Cambodia. It gives you an insight into the subsistence living and dreadful poverty of primitive fishing villages in Cambodia. You pass village shacks on stilts and see livestock in floating pens and kids paddling with babies in small canoes.

Insider Tip – Carry lots of fresh fruit with you. Seeing the way people live here is truly an eye opener, and you’re suddenly thankful for all that you have.

Apsara dance, an ancient art form which has been a major part of the Khmer culture for centuries, is truly worth a watch while in Cambodia. The dance form has experienced tremendous revival over the past few decades, and the shows are no longer cheesy or boring. You can find a number of beautiful apsara dance shows in Siem Reap, and if you happen to come across a good troupe while in Cambodia, visiting an apsara dance show is an absolute must.

Most travelers visiting Cambodia make the mistake of restricting their itineraries to Phnom Penh and Siem Reap. To some extent, both destinations act as a bubble and hardly ever let visitors see the true Cambodia and its actual culture. Thus, for a glimpse of things like timeless landscapes, the last few freshwater dolphins in the region, the local culture, mountainous landscapes, swaying sugar palms and exotic tropical islands, you need to get away from the major cities and visit the countryside.