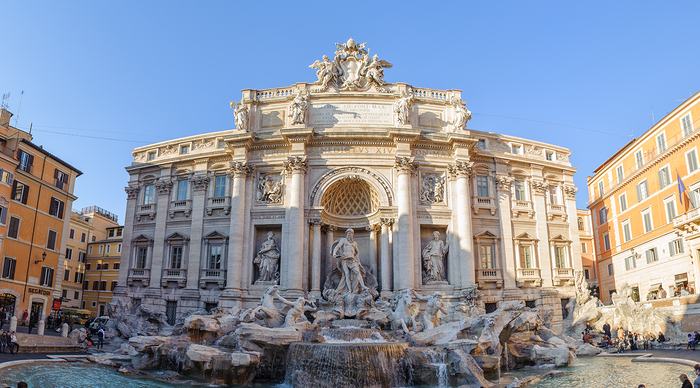 With a 3,000 year strong history rich in culture, art and architecture, Italy’s capital stands as one of the most sensational places to visit for tourists. Rome is marked by incredible architectural heritage and mesmerizing panoramic views, attracting thousands of tourists each year who are even keen to explore the attractions of the once glorious Roman Empire and the artistic remnants and displays of Renaissance era sculptors.

If you are looking to visit an ideal destination to spend quality time with your friends or family members, Rome is the place. In this article, we present the top 12 things to do in Rome.

The Colosseum in Rome is very often the first of things to visit on the minds of tourists. Built in 72 AD, The Colosseum was home to great gladiatorial battles and contests for thousands of crowds and later reused for holding Christian religious education.  Marvel at one of the wonders of the world in Rome- Colosseum by night.

There are a multitude of day and night time walking tours available that guide you through the iconic engineering and architecture of the amphitheatre, including the history of gladiators and the contests that took place in it. You will be given a tour ticket or pass which will grant you entry. The following 3-hour guided tour to the Colosseum is a great way to experience Colosseum and the ancient Rome. The following Skip-the-line entrance to Colosseum tour is also highly recommended.

Interesting Fact: An estimated 500,000 people reportedly lost their lives throughout the period of gladiatorial battles and contests.

The museums of the Vatican City are a must-visit for anyone wishing to see the remarkable sculptures and influential art from the Renaissance period. Go on a 3 hour art adventure in the heart of Christendom in Vatican Museum’s walking tour. In this tour, you will explore some of the most prolific sites such as the Sistine Chapel, the residence of the Catholic Pope and home to some of the most exquisite and beautiful paintings by Renaissance painters, Michelangelo and Raphael.

This tour will provide a thorough understanding of the history, politics and features of the Vatican, which makes it one of the top things to do in Rome.

The Arcibasilica di San Giovanni in Laterano or St. John Lateran’s basilica is one of biggest cathedral churches in Rome. It is considered the mother church in the Catholic faith and has undergone several reconstruction phases under projects of various Popes throughout the period.

Several tours are available that you can find to explore the basilica.
Interesting Fact: St. John Lateran’s basilica was first built in 314 AD making it the oldest church in the world.

The St. Peter’s Basilica is considered as the pillar of Catholic shrines that is located inside the Vatican City. It holds a unique place in the heart of Christians from around the world owing to the burial site of St. Peter, the first Pope in the Catholic tradition.

It is also known to be a hallmark of Renaissance architecture due to it being designed by renowned Renaissance sculptors such as Michelangelo. St. Peter’s Basilica is a major tourist attraction.

Interesting Fact: The St. Peter’s Basilica is the largest Catholic Church in the world.

The Pantheon is another of Rome’s architectural masterpieces. Originally built in the year 27 BC, it was later changed into a Church in the 7th century and is the burial sites of well known figures such as the Renaissance artist Raphael and King Victor Emmanuel II.
Though you can visit the Pantheon any time of the day, the recommended time to visit is the evening and is open every day for the public.

Interesting Fact: Pantheon is a Greek phrase that translates to mean “honor all Gods”. Its construction was intended to be a place of worship to all gods.

Going on multiple walking tours is bound to make you tired and hungry. What better way to fill your hunger by getting the best of Italian pizzas at Pizza al Taglio. This restaurant offers some of the best sliced pizzas in different portions and types. Whether it is tomato and mozzarella pizza or beef, Pizza al Taglio offers you the best of authentic traditional pizzas.

Interesting Fact: The pizzas in Al-Taglio are served and priced according to the weight of each slice. Al Taglio lives up to its name meaning slice.

Located in twin palaces on top of the Capitoline Hill, the Capitoline Museums contain archeological artifacts. The collection includes Roman statues, medieval as well as Renaissance art, coins and jewels.

Interesting fact: The Capitoline Museums’ collection is the oldest public art display in the world.

Stop by at the Villa Borghese Gardens to absorb the fresh breeze of nature. In contrast to how Rome may appear to be a city for Roman history enthusiasts only, the Villa Borghese gardens is the perfect place for both children and adults to enjoy. There are many points of interest that you can find in the gardens upon visiting.

Interesting fact: The development of the gardens was intended to be used by Cardinal Scipione Borghese as his party villa in Rome. It was later reconstructed in the 20th century.

There is nothing more relaxing than hearing the sounds of flowing water. The Trevi fountain has something for everyone to enjoy. Located in a piazza, the gushing waters in front of the monumental architecture makes the Trevi fountain an exhilarating attraction for many tourists.

If you are looking for a guided tour to Trevi fountain and other famous monuments don’t miss out on the Heart of Rome half-day guided walking tour.

Interesting fact: The water pouring out of the cast iron pipe on the steps of the fountain is ready to drink, something the Romans from the past enjoyed.

If you find the Colosseum exhilarating, there is no reason for you not to go to the Roman Forum. Known for being the centre of the city in Ancient Rome, it houses some of the oldest of government buildings and temples of the time. Multiple tour guides are available for you to learn about the fascinating Ancient Roman political history. The following tour includes both Roman Forum, Colosseum, and the Palatine Hill.

Interesting fact: It took more than a century for excavations to clear the Roman Forum.

This is a landmark made from marble that represents a man-like face with his mouth open. Situated outside the Church of Santa Maria, this ‘mouth of truth’ is reminiscent of a legend which says that if the person who puts his or her hand into the mouth is a liar, the mouth will bite off the hand.

Interesting fact: The mouth of truth test was featured in the 1952 Oscar winning movie ‘Roman Holiday’.

If you are considering shopping in the ancient city of Rome, there is no place better than the Via Condotti. Via Condotti is filled with a unique combination of both historical buildings and shopping boutiques. A visit to Via Condotti can provide a refreshing alternative to the educational walking tours around the Colosseum and Vatican museums.

Interesting fact: The terms Via Condotti translate to ‘by way of canal or road’ as it was one of the streets in Ancient Rome that allowed people crossing the Tiber River to arrive at Pincio hill.

Rome is a fantastic destination for you to visit and make use of your coming summer holiday. It contains a wide array of famous attractions and things to do and enjoy with family and friends. If you are going to Italy, please check our Italien tours, trips and tickets.

If you are going to Venice, please don’t miss out on the top things to do in Venice also.

One thought on “Top 12 Things to Do In Rome”