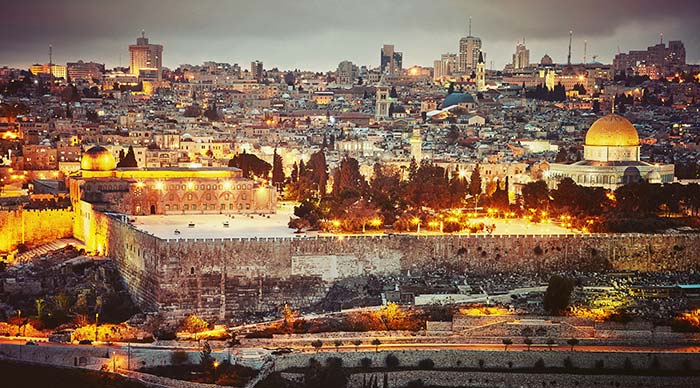 UNESCO has been on a mission to find areas of the world that have significant value for the natural environment, or human history. These areas are called “World Heritage Sites” and are accorded a number of protection and conservation protocols, which are intended at preserving these sites, the way they are, so that all of humanity can enjoy them now, and in the generations to come.

However, no matter how hard the UNESCO tries, there are some areas that are at risk, due to human factors (such as deforestation, civil war, uncontrolled expansion, etc.) or natural factors (erosion, uncontrollable natural processes, etc.). If you want to visit any of these spots, now would be the best time- nobody knows what condition they might be in soon!

Jerusalem is a magical city. The moment you enter you can literally feel something different in the air. This is the holy city of not one, but three of humanity’s major religions (Judaism, Christianity, and Islam), and you can feel the prayers of all these three religions permeating the air. The Old City of Jerusalem is supposed to have been built in 1000 BC, by the legendary King David. The Armenian, Christian, Jewish, and Muslim Quarters form the entire city, which is full of ancient ruins, churches, and temples that have been places of worship for thousands of years. The old city is currently under threat due to excessive tourism, and major urban development. While attempts to conserve the city are in place, one can never predict what might happen!

Assur is an ancient city that used to be the capital of Assyria. The city was excavated in the early 1900s, and has been an important archaeological site since then, as it provides us a lot of information about the Assyrians, Babylonians, and the Parthians. The city is famous for its border walls, and the unique temples and palaces that lie within. The place is an architectural marvel, and a rather off-beat one, so it will definitely be an amazing destination! The area was under threat during the Iraq War, but since then, it’s main enemy has been lack of conservation efforts and protection. It’s not possible to say if it is too late for conservation efforts to begin, but this is an ancient city you must definitely not miss.

Off the coast of Belize lies one of the most complex barrier reefs. This is the largest reef system in the northern hemisphere, and is home to a number of marine animals, including the manatees, turtles and American marine crocodile. This area is absolutely stunning, surrounded by lush mangroves, beautiful lagoons, and the bluest of blue oceans. The most unique spot here? The Belize Blue Hole, an underwater trench! The barrier reef is under threat of excessive fishing, global warming, and pollution. While it is in a better condition than the Great Barrier Reef, nobody can predict the adverse effects the coming years will have on the reef. Prepare for some of the best things to do in Belize Barrier Reef, one of the world’s best vacation spots for scuba diving, snorkeling and fishing.

The Rainforests of Atsinanana, Madagascar

Madagascar is one of the most uniquely ecologically diverse spots on the planet, for all the plant and animal life on the island have evolved in complete isolation for 60 million years. The Rainforest of Atsinanana is the name for the 6 national parks that form the area. These forests have unbelievably high number of endemic plants and animal species. If you are a fan of nature, the rainforests will be the most exceptional experience you will ever have. They are now under threat of deforestation and excessive logging, causing the endangerment of a number of animals that live there. Book your tickets to Madagascar and enjoy the island in its most pristine form!

Nan Madol, in Pohnpei island, still remains a mystery. It’s an ancient city built atop a coral reef. The area lends itself to a number of mysteries and legends, and for good reason. First and foremost, it is a miracle that the city got built at all- modern architects are still at a loss so as to how this city could have been built over a thousand years ago! Moreover, the civilization that built it, the Saudeleur, have not left any traces of their culture behind- no written works, art, carvings- nothing. The only information that remains about them is in the oral history of modern Pohnpei! The entire town is currently endangered due to water silting and rising ocean levels, so visit now!

All of us want to explore the world, so that we can understand more about the planet we live in. Unfortunately, there are some places that won’t be around for decades to come. So, go and explore these places now, before they just become stories in our imagination.