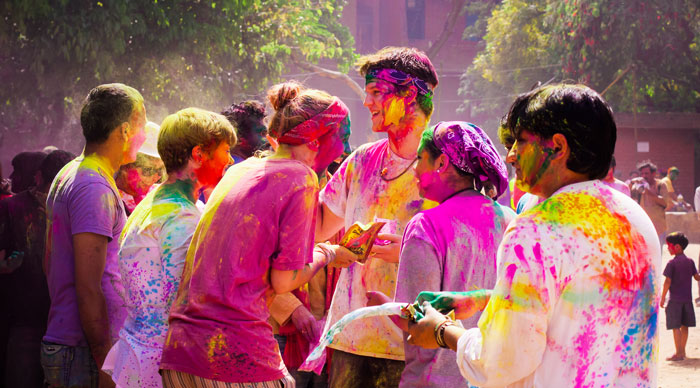 Holi, the Festival of Colors, is held in many parts of India in the month of March to celebrate the triumph of good over evil. Festivities usually begin the night before Holi with a bonfire. People gather around the fire and celebrate Prahlad’s victory over Holika, a demon who was burnt alive despite being immune to fire.

The next morning is when the real celebrations take place. People meet and greet each other and spray friends and loved ones with water, flowers and colors. The day is full of singing, dancing, offering blessings to loved ones and drinking bhang, Lord Shiva’s favorite, ground cannabis mixed in milk, the perfect way to get high on Holi.

The origins of Holi

The exact origins of Holi are still in question. Different parts of the country believe in different mythologies, but the most accepted theory is that Holi is held to celebrate the death of Holika. It is said that Holika took Prahlad in her lap and sat in a bonfire as she was believed to be immune to fire. However, Prahlad was unaffected and Holika ended up getting burnt alive. Legends also have it that Holi is held to celebrate Radha’s unending love for Lord Krishna. It is believed that as a child, Krishna was unhappy with his darker complexion and complained about Radha’s fair complexion to his mother. His mother told him to playfully apply colors on her body, thus giving birth to the festival of Holi.

Where to celebrate Holi

Many cities, towns and villages across India celebrate Holi, but there are a few celebrations which really go to the next level. From posh Holi parties to traditional dances, from beautiful flower festivals to music and dancing, these are the Holi celebrations you would want to become a part of this spring season.

Considered to be the top places to celebrate the Festival of Colors, expect the temple towns of Mathura and Vrindavan to be packed around Holi. Celebrations get underway from Vasant Panchami, a festival celebrating the end of winter, held approximately 40 days before Holi. The Holi Gate is the main venue for Holi celebrations in Mathura. A huge procession takes place from the various temples along the river to the gate and the event is full of music, color and flowers. Vrindavan is more famous for its legendary Banke Bihari temple celebrations. Another interesting place to celebrate Holi is in Gulal Kund, Braj. In fact, you can see Holi re-enactments through the year near this beautiful lake.

Holi is celebrated as Basanta Utsav in Shantiniketan and this festival was started by none other than Nobel Laureate, the favorite son of Bengal, Rabindranath Tagore. The festival was introduced as a yearly event to the students of the Vishva Bharti University and celebrations usually included dances, Tagore’s songs and spring dresses. This is followed by Holi-like celebrations of throwing colors on each other.

Hampi presents Holi in an entirely new light. Since Holi is mostly a north Indian festival, the celebrations in South India usually feel subdued and muted. That said, Hampi has been the main focus of Holi celebrations in the region. The entire town turns out to play Holi in the morning and celebrations include lots of music, colors, drumming and dancing. The crowd passes the ruins of the grand Vijaynagar Empire and slowly moves towards the river to wash off the colors.

Delhi, one of the best cities to be in, celebrates Holi in an entirely new light. While many parts of India celebrate Holi in the traditional manner, Delhi is more about posh Holi parties and events. You also have street celebrations across the city, but travelers are usually discouraged from becoming a part of those celebrations. Bookmundi also offers an entirely unique Holi experience for those visiting North India. Check out the link to know more.

Holi celebrations in Purulia, a small town located at a distance of about 250 kms from Kolkata, are very different. Festivities are spread across 3 days and are full of traditional dances such as the Chau dance, Natua dance and Darbari Jhumar. An excellent way to understand the culture of the East!