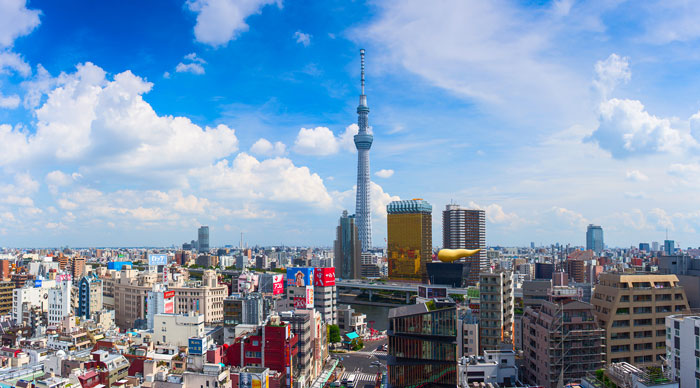 Those cobblestone streets, enchanting plazas, historic wonders, gothic beauties, baroque wonders look so romantic, but they also look so “every day”. After all, the whole world visits these historical sites and floods the social media with selfies. So how about doing something different for a change?

We recommend that you plan a tour to one of these futuristic cities, destinations of tomorrow that embrace the very best of architecture, Eco-friendliness, and technology, to create majestic designs like you’ve never seen before. From man-made islands to gravity-defying buildings, from scintillating architecture to the very best of technological advances, there are so many futuristic destinations to choose from.

What makes Tokyo so different from other destinations in the East is its futuristic architecture, and just about everything else that it does. Almost everything in this city points to the future, right from its cuisine to advanced railway systems. Tokyo also boasts of next level haute couture stuff and is also home to some of the strangest museums on the planet. Its glittering skyline, dominated by the brand new Skytree Tower is an obvious attraction as well. Rising to a height of more than 2000 feet, the Skytree Tower is the tallest structure in Japan and the second tallest in the world.

Whoever imagined that a tiny dot on the world map would end up becoming one it’s most important destinations in terms of business, finance, tourism and futuristic living! Singapore’s technology is best seen through its larger-than-life attractions such as the beautiful Supertree Grove, a series of tree-shaped structures that rise to a height of 16 storeys, and are responsible for absorbing heat, offering shade and collecting rainwater and solar energy. The city has already committed itself to zero waste in landfills by the middle of this century and it is also the first place to introduce congestion charges. Other advancements worth talking about include RFID cards that are offered to the elderly and the disabled. These cards can extend the crossing times at traffic lights to make things easier.

Masdar is an eco-city that is currently being constructed outside Abu Dhabi. It is destined to become a hub for cleantech organizations and certainly lives up to its billing. The city relies entirely on renewable and solar energy sources, which means that it is carbon neutral. Its buildings are shaped in a unique way to draw cool air down into the city to promote natural cooling. Public transport has also been taken to the next level in the form of driverless pod cars and automated electric transportation systems.

Songdo is being built on 1500 acres of sand close to Seoul and has been billed to become the best smart city on the planet when it is finally ready in the year 2018. It is home to a humongous park which sets off emissions and close to 40% of the land area has been reserved for green space. Kitchen waste is sucked into a network of tunnels which sends it directly to waste-processing centers and all household appliances shall have the capability to be controlled by smartphone apps. There’s some weird stuff as well. Each home shall be fitted with a telepresence system which is basically a variant of Skype that is fitted into the teles, and micro-tracking bracelets shall be offered to help parents keep a track of their little ones.

Hong Kong introduced a contactless smart card system at a time when the rest of the world was just beginning to conceptualize the idea. Termed as a card that makes everyday life easier, this system can be used on all sorts of things, right from fast food outlets and parking meters to public transportation and vending machines. Other innovations that put Hong Kong on the map of futuristic cities include fingerprint scanners and smart ID cards which allow locals to breeze through customs. And the city’s smartphone penetration is also known to be the highest in the world! But Hong Kong isn’t just about its technological innovations. It also boasts of fascinating architecture. It has more skyscrapers than any other city on the planet and some of them are truly gravity-defying.

The following tours in Hong Kong are highly recommended:

Mall of the World, Dubai, UAE

A map of the world created by man-made islands. The tallest free-standing building on the planet. Beautiful underwater hotels and restaurants. Indoor ski slopes in the midst of an arid desert. Over-the-top luxury hotels. The largest mall in the world. Dubai is already home to some of the most forward-thinking examples of architecture, and it is just one of those cities that constantly focuses on the bigger and the better. Dubai has already started construction of an indoor climate-controlled city known as Mall of the World, and if it’s present attractions are anything to go by, this should be just as futuristic.

Admire the fantastic Dubai Mall on the following tours:

You might find it strange that a city that is famous for its relaxed way of life, red light district and “coffee shops” (psst.. the ones that legally serve you know what) finds a place in the list of the most futuristic cities around the world. But, what does one do when one has a major shortage of land area, but an overabundance of water systems and canals? One starts living on the water! And that’s what Amsterdam has already put into practice. Close to 1000 of its residents are currently living in futuristic water-based buildings in the IJburg district. As rising sea levels become a concern the world over, the city is already planning to expand the number of such water-based buildings as well. Another reason why Amsterdam is so futuristic is its use of technology and smartphones. There are all kinds of apps which can be used for all kinds of things – right from seeing which cars in a particular incoming train have seats, to finding out more about the latest event listings.

A trip to any of these futuristic cities around the world always promises an experience of a lifetime. Some might not be ready just yet, but those that are already there vying for your attention, are certainly worth visiting. If you’re tired of the same kind of attractions, a trip to one of these destinations might just help you change your perspectives on travel.

2 thoughts on “Futuristic Cities Around the World”