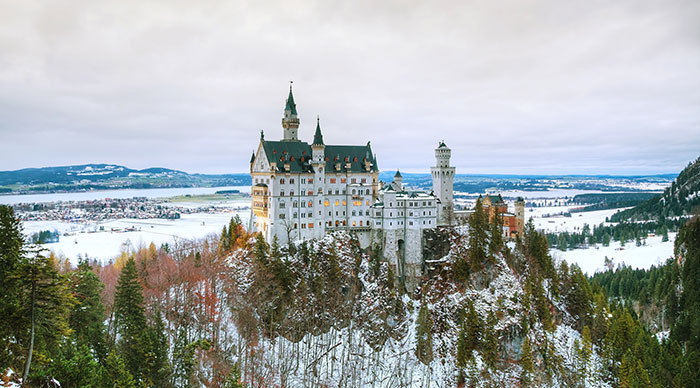 The world of Disney is nothing but magic. The tales, the stories of valor, love, romance, villains, fairy godmothers, everything feels so surreal and enchanting, yet so believable. One of the biggest charms of these movies is the make-believe destinations they conjure in our minds- that perfect place with the most beautiful flowers, exhilarating architecture and alien-like landscapes.

Almost like a scene right out of our childhood dreams. But did you know that many of your favorite scenes from these make-believe stories and places are actually inspired by real-life destinations? Today, we’re dishing out all the info on the places that inspired Disney’s greatest movies.

“But they say if you dream a thing more than once, it`s sure to come true.” Aurora might have just been dreaming about her handsome prince, but King Ludwig II dreamed an entire castle from his fantasy into existence! Remember that iconic castle in Sleeping Beauty? The very one that later found a home in Disney’s Magic Kingdom. Turns out it was inspired by Germany’s most beautiful and most royal residence, the Neuschwanstein Castle. Built by the ‘mad king’ Ludwig II, Neuschwanstein is a mythical place evoking a sense of awe and fantasy in the same breath. Boasting a beautiful exterior and a fairy tale interior, this is surely a must-see while visiting Bavaria.

The Notre Dame Cathedral of Paris is one of its most recognizable sights as well as one of the most visited landmarks on the planet. Considered to be one of the shining examples of Gothic architecture, this grand cathedral is full of beautiful stained glass mirrors and exquisitely carved sculptures. Disney gave this cathedral a new-found sense of stardom in the movie The Hunchback of Notre Dame, modeling the cathedral in the movie after it. It even brought those gargoyles to life and made them actual characters in the movie. The cathedral was built over a period of 200 years, and a simple look at its iconic structure makes you realize why people around the world fall in love with this work of art.

The Château de Chillon in Switzerland inspired Prince Eric’s beautiful castle in The Little Mermaid. This island fortress lies along the shores of Lake Geneva and its unique design makes it look as if those stone walls are plunging right into the surrounding waters. The castle dates all the way back to the Roman empire, and it literally looks as if it was transported right out of a fairy tale. No wonder it found a place in a Disney movie!

The Festival of Lights is known for the lighting of thousands of lanterns that are then sent into the sky, each carrying the burden of a wish of the person releasing the lantern. In mere moments, the sky is transformed into a surreal ocean of lights floating into oblivion and the scene is as magical as any you’ll ever see. The locals see the festival as a means of honoring Buddha, but Disney gave it an entirely new meaning as it made Rapunzel’s parents release these lanterns to commemorate the loss of their daughter in the movie Tangled.

The picturesque town of Alsace inspired that tiny village square in Beauty and the Beast. Alsace is a stunning region on North-West France that boasts of German influences and presents a magnificent blend of the two cultures, both in its architecture and its lifestyle. Belle’s home village in the movie took after the region with rows of colorful buildings and cobblestone streets all inspired by this tiny slice of heaven. Even the castle in the movie was inspired by Château de Chambord, a 16th century hunting lodge in Loir-et-Cher. 426 rooms, 77 staircases, 282 chimneys, no wonder it is so easy to lose your way around the property.

“Did you ever build a castle in the Air? Here is one, brought down to earth and fixed for the wonder of ages.” American novelist Bayard Taylor perhaps came the closest to describing this awe-inspiring feat of genius. Surrounded by glistening white marble that is believed to exude different colors at different times of the day and picture-perfect gardens, this surreal tomb has wowed poets, writers, movie directors and travelers the world over, so much so that it also inspired the Sultan’s Palace in Aladdin. Many falsely believe the most photographed destination of India, one of the Seven Wonders of the World, to be a palace, but this monument of love is actually a Mughal tomb built by Emperor Shah Jahan in the memory of his wife Mumtaz Mahal.

Carl Frederikson from the movie Up needed thousands of helium balloons to get his house to Paradise Falls. While you might not be able to transport your house, you can certainly go and visit its real-life inspiration, the Angel Falls in Venezuela without having to resort to the use of helium balloons. The world’s highest waterfall falls without interruption for 979 meters and is surely a sight to see. The falls can be reached by flying into Canaima and taking a four-hour boat ride upstream followed by a 90-minute hike. Sounds like a lot of effort, but it’s totally worth your while!

A single look at Brave is enough to remind you of those wild, surreal Scottish landscapes. The movie’s representation of the Scottish Highlands is enough to take your breath away, but wait till you take a look at the DunBroch family castle, inspired by three iconic Scottish properties, the 13th century Eilean Donan Castle, Urquhar and Dunnottar. Those fantasy-like standing stones in the movie are actual representations of the real-life Callanish Stones as well. This ancient circle was built in the Neolithic Era as a lunar observatory.

Kauai is one of the key destinations in Hawaii. As one of the least commercialized islands, this is where nature was allowed to run free. There are 60 fantastical beaches in Kauai, each leaving you mesmerized and speechless. The island is also full of national parks, trails, waterfalls, rugged mountains and many parts are still untouched by civilization. Needless to say, this is one of the most magical destinations on the planet, and obviously, it had to find a place in the world of Disney! The movie Lilo and Stitch perfectly portrays the Hanapepe town in Kauai, giving it the sleepy, magical feel that it deserves. Those homemade mailboxes, wooden sidewalks, rusty bridges and tin roof homes remind you of the old American west, and for a moment you completely forget about the passage of time as you dive into this beautiful little town, probably reliving a Disney adventure from your childhood.

“Ice is my life!” Kristoff’s goes expressionless as he stares in awe at the beautiful ice palace, and that’s exactly how you’ll feel the moment your eyes fall upon Hotel De Glace. Frozen might have worked like a charm for tourism in Norway, but it also popularized another iconic sight from Canada, the icy Hotel De Glace, a magnificent seasonal structure that is built on the outskirts of Quebec City each winter. The style of this hotel varies from year to year, but a hotel that is entirely built out of ice bricks and its extraordinary design makes it one of the most unique hotels on the planet, the perfect inspiration for Elsa’s ice palace.

As one of the most culturally and historically rich destinations in America, New Orleans gained quite the fan following around the world. Its annual Mardi Gras celebrations and its quirky character also did wonders for its charm and appeal. There’s an entirely different vibe to the town, a jazz-like feel. New Orleans has always been called the City of Happy Endings, and that reputation probably saw it find a place in the movie “The Princess and the Frog”. Just about every part of the story seems to be inspired by the city, and this Disney movie is probably the perfect tribute for everything this beautiful city stands for.

“Some people are worth melting for.” Thankfully Olaf the Snowman didn’t have to melt away for Princess Anna, but you just might when you visit St. Olaf’s Church, portrayed as the Chapel in the movie Frozen. Showcasing some of its most mesmerizing scenes, the movie made the world realize just how beautiful this country truly is. This stunning Anglican church was built in the memory of Margaret Sophie Green Kvikne, an English woman who married a local, but never felt comfortable with the Lutheran rituals in Norwegian churches. Apart from the church itself, the country’s rich Scandinavian heritage, its iconic fjords and ancient Viking settlements have also been beautifully represented in the movie.

If you’ve been yearning for that fairy tale destination for your next vacation, take a second look at these places that inspired Disney’s greatest movies. The inspirations behind those dreamy castles and fantasy surroundings are often real world locations, and you’re sure to create a story of your own in any of these places.