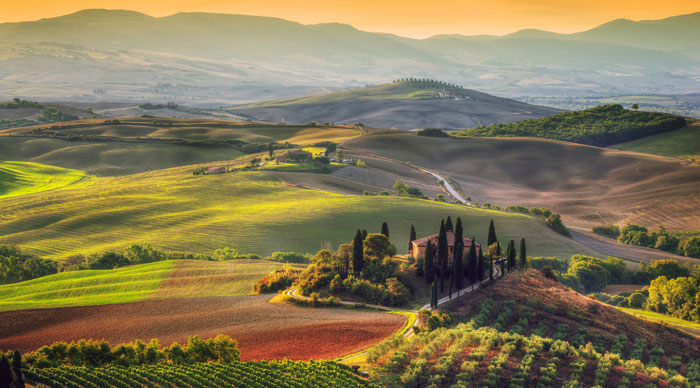 Italy has its obvious charms. The Vatican City, historical center of the Roman Empire, some of the best cities in Europe, a varied cuisine, rich art and architecture.

However, if you’re a wine lover or a nature enthusiast, give one of its wine regions a day or two, for Italy has been making wine for more than 2000 years. In fact, those Chianti and Sangiovese varietals are some of the oldest wine varietals in the world. And the natural beauty that the top wine destinations in Italy have to offer is to die for. Below we are listing Italy’s top wine destinations in arbitrary order (they each have their charms and all produces great wines)!

Tuscany has been producing wine ever since the time of the ancient Etruscans. Wine and olive trees were considered to be sacred plants that offered lifesaving properties, and with the discovery of wine ingredients such as resveratrol, you realize that these ancient beliefs weren’t far from the truth. Wine making has dramatically evolved over the years, with new practices being introduced by the Romans, Christian monks and the Renaissance-era aristocrats. Tuscany is most famous for its sangiovese and chianti wines and its brunello and montepulicano varietals. The ideal base for your wine explorations is Siena, an enchanting old-world city located on the edge of the Chianti foothills. Florence is another popular city in the region. One of the famed art cities, Florence presents an unparalleled collection of Renaissance-era arts, sculptures and architecture.

Chianti Classico is the most prestigious sub-region in Tuscany, and it is actually one of the most picturesque wine regions in the world. If there is time for just one wine region while in Tuscany, make sure that you visit Chianti Classico. It is really THAT good. To the southeast of Florence, lie the villages of Arezzo and Cortona. As you head further west, you come across the Maremma region, home to the world-famous ‘Super Tuscan’ wines. The top vineyards in Tuscany include Casa Vinicola, Biondi-Santi, L.Cecchi and Castello Banfi.

What makes Lombardy so weird and beautiful at the same time is that despite being a major industrial province, it is home to some of the most beautiful vineyards and some of the best wines. Located just below Switzerland, the region hosts a number of artistic cities such as Cremona, Mantova, Bergamo and the bustling city of Milan. It is blessed with fascinating natural beauty, including the breathtaking Lake Como and the beautiful Lake Iseo, and has been making wine since before the Ancient Romans. It even has the highest concentration of Michelin-starred restaurants in Italy. The most powerful wines of Lombardy come from Valtellina, a small town where winemaking is done on an artisan scale to ensure the production of high-quality wine. It is the perfect place to discover the hidden gems of Italian wine.

Laguna is the most picturesque wine region in Lombardy and is full of castle-studded towns and old-world fishing villages. Dramatic lake scenery and the very best of white wines are what make Laguna so famous. For those wanting something closer to Milan, Oltrepo Pavese offers great insights into the traditional winegrowing methods of Lombardy. Some of the top wineries in the region are Casa Re, Il Bosco, Monsupello and Frara.

Piedmont is a lovely wine region that is dominated by picturesque vineyards, castles and romantic hills. It often finds a place among the top wine destinations in Europe thanks to its fascinating natural beauty, and is popularly known as the ‘Burgundy of Italy’. The region is most famous for its boutique wines and it attracts gastronauts from all over the planet. The world famous Slow Food Movement also began here. Winemaking in the region is mostly artisan and production is microscopic. Most wineries are family-owned and this makes for outstanding guided wine tours. In fact, it is normal to come across villages that are entirely dedicated to the production of wine. The best areas in Piedmont for wine tasting and spectacular sceneries include Roero, Langhe and Monferrato. The villages of Asti and Alba are ideal bases for your wine explorations. Alba also hosts the Truffle festival each year, while Asti is known for its Palio festival.

The main city here is Turin, famous for its ‘Shroud of Turin’ and world-class chocolate makers. The best time to visit Piedmont is during the autumn months as the red and orange vines begin to glow due to the reflection of the snowcapped Alps. Barbaresco Cry and DOCG Barolo are the superstar wines from the region and Pio Cesare, Mossio, Braida, Ceretto, Roagna and Angelo Gaja rank among the top best wineries here.

Sicily is most famous for its stunning coastlines, baroque churches, Greek temples and natural beauty. However, what most people fail to realize is that the region is also famous for its rustic local wines that offer flavors such as pistachios, almonds, citrus fruits, tuna, and more. There are all kinds of stunning towns in Sicily such as Cefalu, a traditional Mediterranean town, and Taormina, one of the most stunning Greek towns in the world. Those wanting dramatic beauty cannot miss out on the Aeolian Islands and the Pelagian Islands.

Inzolia is considered to be the best white wine in the region and is commonly used with varietals such as Catarrato, Zibibbo and Chardonnay. The flagship red wine of Sicily is Nero d’Avola, a super-sexy and incredibly spicy red wine – trust us!! It is commonly blended with Syrah. The ideal wine towns in Sicily are Ragusa, Messina, Marsala and Noto.

A land of unforgettable sceneries, iconic towns, rich history and beautiful cultures, varied cuisines, beautiful arts, enchanting architecture and wines to die for, Umbria, often called the green heart of Italy, is the perfect destination for gastronauts visiting the country. The hamlet of Montefalco is an ideal base for wine explorations in Umbria. Located at a height of 1550 ft. above sea level, the town presents an exciting mix of Romanesque churches, medieval walls and delightful old-world lifestyles. The sleepy town of Torgiano is equally famous thanks to its impressive defensive tower and the most important wine museum in Italy, the Museo del Vino Torgiano.

The winemaking industry can be traced back to Benedictine monks who first planted vineyards in the sandy soil that extends all over the region. Orvieto is the most famous white wine of Umbria and is exported all over the world. The Sagrantino di Montefalco wine is considered to rank among the boldest and most powerful red wines in the country. Some of the top producers in Umbria include Caprai, Paolo Bea, Falesco, Scacciadiavoli, Antinori and Lungarotti.

Exploring the wine scene of Italy offers unimaginable pleasures to wine and gourmet lovers, including the chance to discover new wines and learn more about the art of wine making. Better yet, each trip also lets you enjoy the best of Italian food and the most beautiful countryside sceneries.

One thought on “Top Wine Destinations in Italy”